The bunch of grapes of the Cabernet Sauvignon are small to medium with little grape berries hard and pastries, at the thick peel very bloom with a bluish black aspect. The flesh is firm with a astringent taste and special flavour which is its distinctive feature.

Its tannic structure is really interesting , good at aging and wood maturation. It’s never vinified alone due to its lack of greasy and roundness.

When it’s young, the Cabernet Sauvignon develops spicy aromas, with a red berries side and a juicy side in the middle of the mouth. It gives this freshness impression, sometimes mentholated but which allude to red berries. When it’s get older, it gain in complexity, conserves a fruity note and especially develops aromas of cedar, cigar and spices.

Cabernet Sauvignon provides wines that have a very good tannic structure and a steady color when fully matured. They are generally suitable for aging. The aromas of this variety give way to a much more pleasant and complex flavor, when maturity is acceptable. 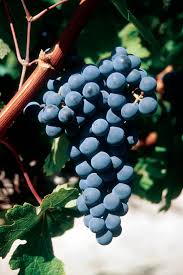